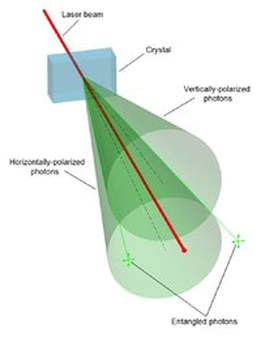 What is the kingdom of heaven like? Jesus taught about the kingdom through parables - simple stories drawn from the everyday world. “The kingdom of heaven is like a mustard seed…like yeast that leavens the bread…like a pearl of great price’. These stories describe the qualities and characteristics of the kingdom now present and available on earth in a way that his audience could relate.

If Jesus were here today, what sort of parables would tell to explain the kingdom? What further insights might be gained from the more technologically advanced world in which we live?
A surprising answer comes from an area of study known as theoretical physics.

Recently, the Chinese launched a satellite that carried with it an astonishing breakthrough in a phenomenon known as quantum communication. It’s a fascinating story from the invisible realm of quantum mechanics. A story drawn from the everyday world in which we live, which also renders a contemporary parable of the kingdom of heaven.

Quantum is a term most of us have heard of, yet one that remains somewhat mysterious. In the subatomic realm, when electrons make a quantum leap from one state of energy to another, photons are emitted as a result. This activity takes places constantly in the heart of the stars we see at night in the heavens, producing the light that winks at us from distant galaxies. In essence photons comprise wave-particles of light that beam across the vast distance of space, finally to be received by our eyes as we gaze upward. In the process of their creation these photons may become linked together, or more properly described - entangled.

Entangled photons share the exact polarized qualities of one another. They are joined in such a way that when one is measured, the other is simultaneously affected. If a quality changes in one, the same quality changes in the other at exactly the same moment. No matter how much distance may separate them. In effect time ceases to exist.  They share the same qualities, they exhibit the same characteristics, in essence they have the very same nature. This phenomenon is called quantum communication.

Einstein rejected this theory, because in effect it describes an action that takes place faster than the speed of light. He named this idea “spooky action at a distance”, and concluded that there must be further unknown factors that would offer an alternative explanation.

Einstein has been proven wrong.

The Chinese have succeeded in separating two entangled photons. One they sent into space on the satellite; the other remained in the lab on earth. Any interaction with the photon in space resulted in a corresponding effect to the one on earth - instantaneously. Heaven and earth joined in the quantum realm, bypassing Einstein’s theory of relativity. It is communication that takes place outside of the boundaries of time and space - like the kingdom of God. Herein lies our parable.

The kingdom of heaven is like quantum communication.  Through the incarnation of Jesus Christ, heaven and earth are joined together in an instantaneous quantum connection. Like two entangled photons, the life of Christ is entangled with the life of God. God the Father in heaven and God the Son on earth share identical qualities, exhibit identical characteristics. The very nature of the Father in heaven is made visible in Jesus on earth instantaneously. They share the same qualities, they exhibit the same characteristics, in essence they have the very same nature.

The Holy Scripture attests to this fact. Hebrews chapter one states, “He is the radiance of the glory of God and the exact imprint of his nature, and he upholds the universe by the word of his power…”[1] Jesus declared, “He who has seen me, has seen the Father[2]….I only speak the words I heard the Father speaking….the works I do are not my own, it is the Father who does the works through me.[3]” Jesus is living in a quantum connection with God. This phenomenon is called the quantum kingdom.

The kingdom of heaven is like a group of entangled photons. As the light of God the Father radiates in the heaven, it immediately shines with equal brightness on the earth in Jesus the Son. This light is no longer winking at us across vast distances, as if from a star in some far away galaxy, but pulsing in the present moment directly into our hearts and souls. When we respond to the light of Christ by faith, a quantum leap occurs. We jump to a different state of energy, and photons are emitted as a result. God’s light begins to shine through us.

The quantum dynamics of the kingdom bring with them other attributes and benefits. Instantaneous connection with the Father means all the resources of heaven are available in the now of earth. Access to the love of God, the wisdom of God, the power of God, and the presence of God is constantly leaping across the divide. Indeed the very immediate word that God is speaking for our lives in heaven is heard in the now of the present moment on earth. This took place first in Jesus himself, he came to establish the link, then leaped into the lives of all who become entangled with him through faith in his name. This was his mission - the mission of the kingdom - to so entangle the hearts of men and women that our lives become instantaneously connected with God.

Living in the quantum kingdom results in our lives become transformed more and more into His image. We begin to share in the same qualities and characteristics of Jesus our Lord. What God speaks in heaven, we speak on the earth; when God acts, we act - the works of God are done through us. As His light shines out in the heaven, it shines out through His people on earth. We embody the kingdom, because we are the body of Christ.

As entangled photons share the same quantum state of being as a whole, so too the life of every Christian is entangled with God the Father through faith in Jesus the Son - instantaneously connected outside of space and time. All who encounter him, all who put their faith in him, share the same quantum state of being.  This is why Paul describes the life of faith as being “in Christ”.

Is your life entangled with Jesus Christ? Or, Are you ensnared in the dark matter that comprises the background of the universe? Perhaps, the time has come to make a quantum leap of faith and entangle your life in the Son.

The more that theoretical physics delves into the story of God’s creation, the more the ultimate reality of the kingdom of heaven comes into view. The next time you gaze up into the night sky, and see the stars winking at you from far away galaxies. Take a moment, pause, and consider, God has removed all time and distance. The quantum kingdom is here, now, in this present moment.